The road to Landinar: Into The Void

For a time the game we were working on after Convoy was known as “Project Spacepunk”. This game was a multiplayer heist-game, a single player squad management game, and following that a space fleet management game.

Landinar: Into The Void is none of those and all of those.

Convoy Games artist Roy shares his thoughts on how Landinar: Into The Void came to be.

Convoy was our big break. We started building the game because we wanted to improve our chances on the job market after university and school. The project got some traction and we decided to do a Kickstarter, which turned out twice as good as what we had hoped for. All the people who bought the game had a big influence on our lives and we are thankful for every sale. Without you we couldn’t have started up the company the way it is now.

After a couple of months of support and vacation we started to dream of other things. The desert world of Omek Prime had been more than 2 years in the making and we were ready for something new. We wanted to prove to the world that making Convoy a success wasn’t a fluke. So we set our sights higher and started working on our next project.

We knew pretty soon that we wanted to make a 3D world. To me personally this was pretty daunting, because as the only artist, the 3D work would fall on my lone shoulders. I had never built a working 3D thing before. So luckily we could hire our friend and now colleague Erik. Erik spent most of his university time working together with Sander and Sipke and we knew he would be a good addition to the team.  He’s been the leader in the 3D process and his technical knowledge was and is far superior to mine. Together we worked out what the world should look like.

First, we made a multiplayer demo where you played as top down controlled corporate spies stealing secrets for money whilst upgrading your own company base. Every now and again you would be defending your base from raids yourself. You were to build defenses, hire robots and place money printers and power plants. 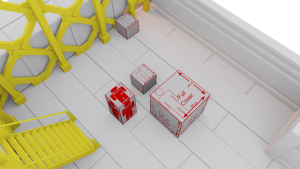 The cover system was working, and in the top you see a small crawlspace for tactical entries.

After a short while we figured out that we couldn’t do networked fun as easy as we hoped. We chose to replace players with player controlled friendlies, scratching the need for network code. The cover system for guns worked, as well as the A.I as they could take cover and listened to player input.

The game became more like X-COM, but the soldiers were robot soldiers. The base building became more hands on, because you should be able to place your own defensive structures and cover. The robots A.I. cores could be produced or stolen and the player would command a tactical squad. We soon found out that for this game to be fun there should be a lot of content in a 3D world.  We built corporate headquarters and cover obstacles for our shooter and for a time we believed that this would be it.

The problem obviously is that we wanted to make a heist game, a management game and a wave defense fortress building game all at the same time. 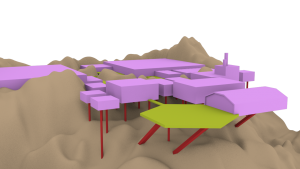 A schematic of a base that you could raid.

After a while something started itching; how would we be unique in a world filled with Shadowrun, Satellite Reign and X-COM? We felt that our shooter/squad combat wouldn’t be tighter or nicer than games already on the market. So we pivoted.

It turned out everyone was ready to jump to space for quite a while. We strapped thrusters and cockpits on our smaller buildings and started calling them spaceships. Our corporate headquarters became larger spaceships and stations (saving a lot of time on modeling streets and alleyways). 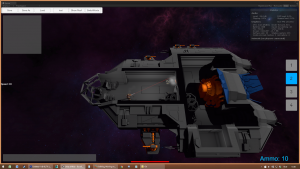 At this point our ships were dockable with each other and supported boarding entry. Something we have successfully removed from the game. Many a tear was shed.

The player could execute boarding actions and defend a space station from incoming raider fleets. While doing research and upgrading his own fleet and ship, the player could build radar dishes to scan enemy ship designs and unlock weapons and hull parts for himself. The enemy factions would be closing in on the player from three sides, setting a classic rock/paper/scissor scenario where every enemy is stong against one other. The player should learn the secrets of all his enemies to defeat them all.

The boarding actions turned out to be boring actions (ba-dum-tss). The weapons and gameplay were intended for larger buildings and rooms, causing fights in these small corridors to not make much sense with rifles and grenades. “Heat Signature” is really nailing this at the moment, so we had to once again look at one of our favorite features and kill it.

Wave defense on your own doesn’t really work. It’s like the end of Spore where you were flying a UFO but the enemy has whole fleets. It’s not fun.

We came closer to liking what we were making but it was not enough. The “why” question couldn’t be answered: “Why is the player there? Why is nobody else doing anything? Who are you?” Here we decided to dust off the good old Convoy dialogue editor. It’s gotten spruced up, but it’s still the great tool we love from our first game, although we will probably leave the chance feature alone for now.

After a fun EGX Rezzed in 2017 we had to take a hard look at our project. Our game called “Project Spacepunk” would surely be shortened to “Spunk”, British colleagues told us. Oops. A name change was added to the task list. I think I received midnight texts with wild name ideas from Sander for about nine months after that.

How it all came together

By now the game had some dialogues, but we had no story, so we brought our Convoy writer back on board. Kevin was happy that he could try his hand at something different than the Convoy dialogue we had him write previously. However, he struggled with the lack of a real universe or overarching plot. Lucky for him, we did have a few world building sessions years back that we latched our lore and tech ideas onto, but we still didn’t have any main players or motives.

And there at the intersection of namelessness and lack of world building we tried to marry our first game to our second title. Right at the end of Convoy, Kevin wrote a small outro containing the sentence “back to the endless war of Landinar’ at which some questions rose on our forums. Landinar, once a character of Kevin in an online MUD, became the direct link to our first game and company name.

To continue the Convoy universe had already sounded like a good idea. For the first time everything seemed to come together and make sense. Like the player at the end of Convoy: back to Landinar it is! Off to space we go! I’ll sure miss making road puns, though.

Are you curious yet?

This weekend (13-15 April) we will present our Landinar: Into The Void demo at EGX REZZED 2018.
Drop by to say hello, make sure to keep your eye on our Twitter and stay tuned for more devblogs soon!