Bringing Landinar: Into the Void to EGX Rezzed 2018

Last week the Convoy Games team headed off to London to present the demo for Landinar: Into the Void at EGX Rezzed 2018. Rezzed has always been kind to us and this year was no exception.
In this week’s devblog we look back at Rezzed and reflect on our experiences, memories and best bits of the weekend.

After Rezzed 2017 we were ready to come back and present our demo for Landinar: Into the Void to the public.

Sander (producer, technical artist):
“We headed off to Rezzed with only vague expectations. We’ve been stuck in the office for so long, without anyone seeing, playing or reacting to the game, we didn’t know what to expect. I was so surprised by the genuinely enthusiastic response we received. Rezzed 2018 was amazing and exhausting. We had so many people stop by to sit down and play. One of them, someone from within the industry, took me to the side afterwards and quietly told me “this game has the potential to be huge”. That really made my weekend.”

We arrived on Thursday late afternoon to set up the PCs at our stand. We spent a couple of minutes staring at the booth. It was huge, in a very convenient spot and our back panel looking bloody amazing. After a few test runs of the build, ensuring everything was working, we happily headed off for dinner (including a little sneak down to the Thames) and our first night in London. 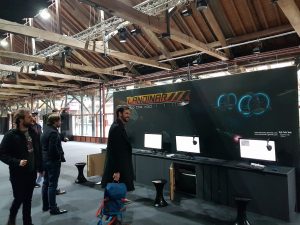 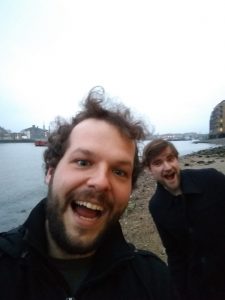 Erik (3D artist):
“I was so impressed by the kids who sat down to play. Some of them were helped by their parents, some of them were so clever I wondered when they were going to give me their business cards. They even did a better job explaining the game and mechanics to each other than we did! A very suprising moment for me was someone from Unity dropping by and complimented us. We keep seeing ourselves like amateurs, not really knowing what we’re doing, but this convinced me we made something really impressive.”

Sipke (programmer):
“It’s a personal achievement that our demo build was working so well. There were only a few bugs, which were mostly funny. The best one I saw all weekend was someone who headed off to a defend cargo/shoot pirates quest by trade lane (the superspeed highway). While on the trade lane, a burning ship suddenly zoomed passed and left the screen again. A series of massive explosions followed and suddenly the ‘quest completed’ marker popped up. I couldn’t stop laughing.”

After a good night’s sleep, Rezzed was amazing from the second the doors opened. There was a great vibe in the air and the people were fantastic. It didn’t take long for a queue to form at our booth. Some people struggled a bit with the mouse and keyboard (mental note: controller support!) and we noticed the tutorial not being as sufficient as we hoped it’d be. Luckily our team was large enough to jump in at any second and we definitely fed off the positive energy the visitors were giving us. It almost surprised us how many people enjoyed our game. We knew we we’re making a fun game, but capturing an audience is a whole different story. We knew we were only presenting a demo, hoping it would give some insight in what the game eventually will be like, but the sheer enthusiasm of the people joining us at our booth really raised our spirits and set us up for a fantastic weekend.

That night we ended up at the Industry Party at the Tobacco Docks rooftop. We talked, we laughed and we played croquet (even though we had no clue what we were doing). Blissful about how the first day went, we could only imagine what the rest of the weekend had in store for us. 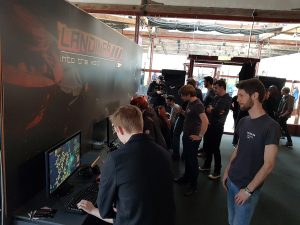 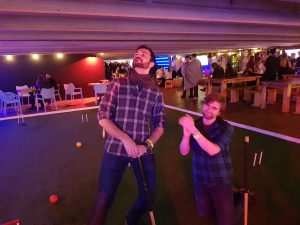 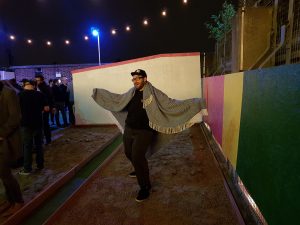 Roy (2D artist):
“We’ve been working on this game for a long time, while not focussing on sales at all. It was a both weird and wonderful change to take this demo to Rezzed. I have to admit I liked the moments off the floor the most. Talking to other devs, press, visitors, I had an amazing time chatting away and meeting new people, and even finding new friendships.”

Saturday started off with a good old quick fix of the tutorial and a few tiny bugs. Our spirits were still high, albeit a little hungover for some of us. We saw people dropping by multiple times, just to have another chance to play. Meanwhile, our team was large enough to walk the floor and check out the rest of the event. Again, we talked and we laughed and we played and we had a blast. At the end of the day we could hardly feel our feet. The night brought even more joy and newfound friendships. 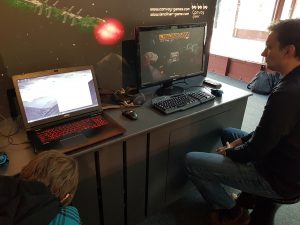 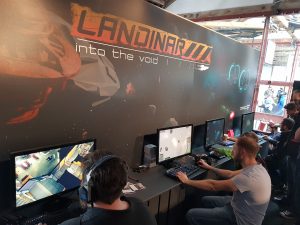 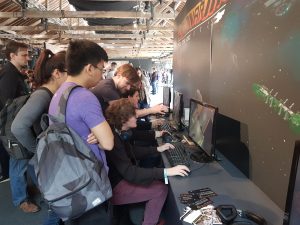 Kevin (writer, quest designer):
“That poor Walter Beulen (the first NPC you run into at Mardo Asset). He keeps telling you he misses his son, but his quest isn’t implemented yet. People really took a pity on him. I think I spent half the weekend explaining his story and the tech-related reason his quest doesn’t pop up to everyone who sat down. I want to personally thank everyone who actually took the time to read all the dialogue.”

Ryanne (community manager):
“I loved every second of Rezzed, even when my legs completely cramped up from standing and walking all day. I really liked chatting with the other devs, everyone being so passionate about their own project and willing to share their personal stories and development processes. Everyone has such a love for gaming and it built an amazing atmosphere.” 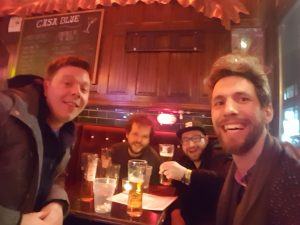 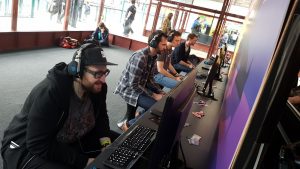 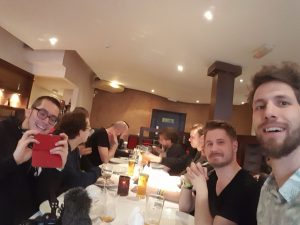 Of course we heard your recurring comments. Time for a post-Rezzed Q&A!

Q: Is this game like FTL?
A: Those who know us might remember Convoy being heavily inspired by FTL. Landinar: Into the Void was not. In our previous devblog we talked about the long road we went down to find out what we wanted Landinar to be.
We didn’t mean Landinar: Into the Void to be like FTL, yet people at Rezzed kept sharing their association with us. We guess this game might be like FTL if you close your eyes, forget about FTL’s graphics and core mechanics and really try to think of what FTL looks like in your imagination. It’s like FTL if the stories didn’t happen after jumps, if you could explore every corner of space on your own and if FTL made customizing your ship mid-journey possible.

Q: Will there be additional crew on your ship?
A: This question is more difficult to answer than you might think. Do we want additional crew? Yes! Do we have to ability to implement it? Of course! But it wouldn’t be satisfactory right now. We would want a crew that is more than a flat buff on a weapon and a mechanic where managing a crew is an actual challenge. Being able to interact with crewmembers would be an important function to have, but right now there are more pressing matters to attent to while developing this game. Maybe if all goes well we’ll be able to scale up the ship crew. But right now it’s future dreams.

Q: Are you out on Steam yet?
A: We are almost ready to drop our Steam page. Visiting Rezzed really made us realise we should have had it up before going. People apparently need this in their lives, need to be able to add it to their wishlist and therefore it will be up ASAP. Early access will be coming late this summer, with a full story campaign being planned for the full release. Keep an eye out on our social media channels to not miss a thing!