Landinar: Into the Void has been out for a few weeks, and while the team has been working hard on fixing bugs and issues, we’ve also been looking towards the future. Hearing all your feedback has been a great way for us to pinpoint which way to head next during early access.

The next months we will be focussing on our first major update: the flight model overhaul.

Let’s start with some background: when we started pre-production on Landinar a few years ago, we had the idea of creating a semi-realistic space sim, proper Newtonian flight model included. During development this quickly changed and the whole “realistic” part was mostly thrown out in favour of fun arcade gameplay. The engines, however, never really got the memo.

The result is that the engines in the game all feel rather “meh”. There have been quite a few players asking what the difference between engines is, which one is the best, and why you’d ever want anything other than your starting engines.

A ship’s mass is determined by the size and the amount of stuff you cram into that size. Currently, the difference between a small corvette and a large cruiser is… Minimal. Additionally, while we have 6 engine parts in the game, spread over 3 categories, and their stats do differ slightly, the biggest difference you notice between a Small Chemical and a Large Ion engine is its placement size and trail color. As a result, having two Small Chemical engines often seems better than one Large Ion. This doesn’t feel right, and makes little sense in the context of the game. Time to fix this!

A question that’s come up a few times is “What the hell are the Side Thrusters for? I thought they’d allowed me to, you know, thrust to the side!”. I’ll try not to get too technical; currently, the side thrusters add torque to the ship’s rigidbody (the game object used for physics calculations), allowing you to rotate faster. This means their use is rather limited and only really useful on (very) large ships. Again, this doesn’t feel quite right.

Another often heard request from people is the ability to “drift”; that is, to be able to keep your velocity in one direction while turning the ship around completely.

We hear you, and so the flight model is the focus of our first major update!

First of all, we’re going to do more with mass and thrust. Small engines will only produce relatively little thrust; enough to accelerate small ship reasonably quickly, but on a big ship it will feel severely lacking. On the other hand, a large engine will feel quite right on a large ship, but on a small ship the huge amount of thrust would be overkill (and placement requirements would make it fairly hard to actually fit).

Making the differences between engine sizes greater means a large engine will feel much more powerful than a small one, and thus more satisfying when you’ve finally saved up enough cash to buy one! Exact end results are to be determined as all of this of course needs to be balanced, taking into consideration placement size, price, and of course ship and engine statistics.

Besides making size variations more interesting, we’re also looking to make the difference between a chemical, plasma and ion engine more meaningful. To do this, we are overhauling the afterburner mechanics by giving a unique ability to each type!

Plasma engines will get a very different afterburner ability: Burn (all?) fuel instantly for a short “jump”. Essentially, you’d move your ship VERY fast for a very short period of time. This should allow skilled pilots to dodge incoming fire and close the distance to an enemy before they can react and get out of range. Of course, some enemies would also have this ability…

Chemical engines will stay pretty much the same: Burn fuel for a speed and thrust boost. This may now sound a little boring, but with the other changes we have planned for this update this should actually result in a significant difference in the way you’ll fly your ship!

For Ion engines we’re currently thinking of giving them a passive boost to cruise speed rather than an active ability. This would make Ion engines the preferred type for exploration and long treks outside of transport lanes, with the tradeoff being that they’re perhaps not the best choice for heavy combat. We think this would fit thematically, because after all, legend has it that some aluminum bird was able to do a certain run very quickly… 😉 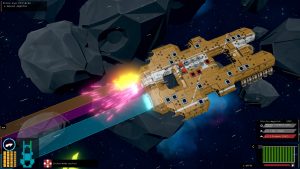 We’re currently experimenting with several new mechanics and associated parts. Stay with us, for over the next few weeks we will dive into things like gyroscopes, brake boosters and inertia dampeners!

Of course, love to hear your opinions! What do you think of the plasma “jump”? What would you want the Ion engine’s ability to be?
Let us know on Discord or the Steam community!

And to quote a personal Scottish internet favorite: “Fly safe!”